(( Questions to the applicant ))

Why do you want to be a part of LSPD?

I would like to become a part of it in order to serve my country. I've been dreaming of being a law enforcement officer since I was a young kid, watching the officers working on the streets. It would be my honor joining such gilorious department. Also, I am in need of a way to gain my bread, and I cant find any better place to be at than this one. Joining this department has always been my goal and will always be. I am ready to obey to all my superiors' orders and do my best to impress them and enforce the law in the city.

My name is Shintaru Omikami, 15 years old, born at Pilgrim, Los Santos, San Andreas,. I've been raised at Los Santos, graduated in LS Law University, I am also holding a master in the international law. My father has been shot by a robber when I was 13. We were defenseless and I was like the paralyzed, couldn't do anything to save him. That robber broke into our house, my father attempted to stop him by hitting him with a chair, but the robber avoided the hit and shot him with a pistol in his right lung, he stayed in the hospital for 4 days then passed away. This situation has made the hate towards the criminals in my heart grow bigger and encouraged me to apply in order to be in an important position in the LSPD and start fighting them. However, I've moved to Las Venturas after finishing my education in order to work, I firstly worked as an assistant-lawyer with my uncle, but I've realized that my goal was bigger than just being a lawyer. I want to be a crime fighter, a law enforcer. I promise that I am going to be lawful, just, honest and fair within the law and I will do everything I can in order to enforce the law in the city along with the other departments.

(( Out of Character information ))


MG: Metagamming - Using OOC informations IC and the opposite works.
PG: Powergamming - Performing abnormal actions that can be done by my character.
KOS: Kill on sight - Killing anyone that you meet..just like that, for no reason
DM: Deatmhatching - Killing someone for a non-rp reason.
RT: Rust Taze - Tazering someone improperly, example: In a gunfight, or inside a car while his windows are up, etc
OOC: Out of character, anything that is not related to my IG character that I am impersonating
IC: In character, everything related to my IG character that I am impersonating
SK: Spawn killing, killing someone that is just spawned/just logged in
CS: Crack shooting, abusing an animation/GTA-samp bug in order to shoot/reload faster, such as c-shoot-c, shoot-switch-shoot, c-roll
CR: Car ramming - Ramming someone repetitively on purpose in order to damage him.

sir can i join this Faction? 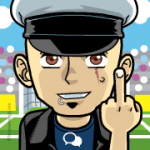